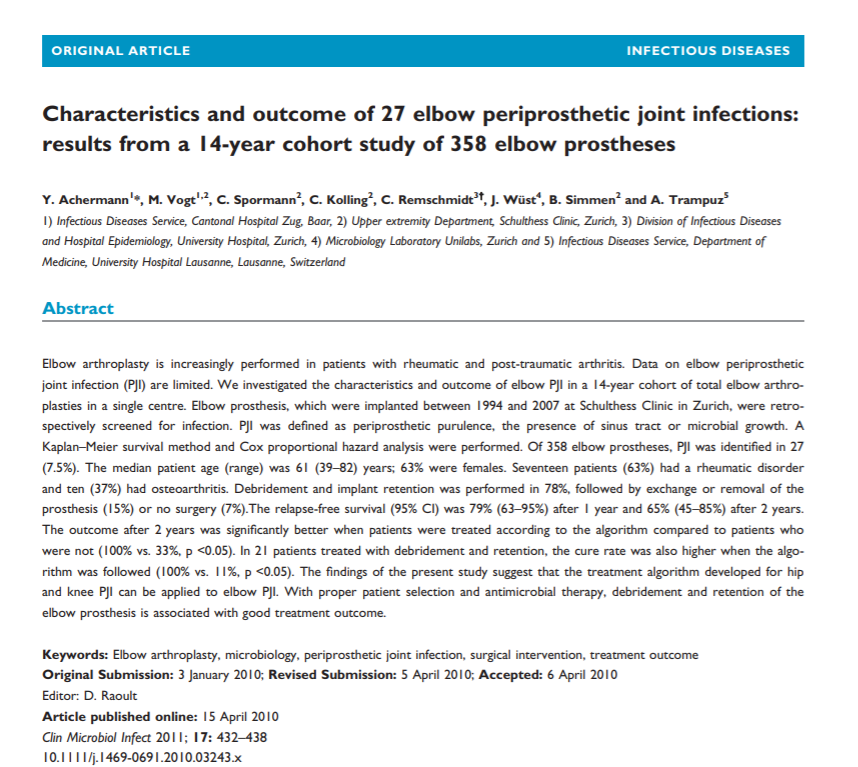 Elbow arthroplasty is increasingly used for the treatment of post-traumatic arthritis or chronic inflammatory joint disease, such as rheumatoid arthritis or psoriatic arthropathy [1]. The first successful elbow arthroplasty was conducted in the early 1970’s [2] and thus, is a relatively new procedure with respect to other joint arthroplasty, such as hip or knee. As with any joint arthroplasty, there is an increased risk of periprosthetic joint infection (PJI) following surgery. With the incidence of elbow PJI being reported in the range of 3-11% [3], this represents an increased likelihood of infection compared to hip or knee arthroplasty. Despite this, the optimal surgical and antimicrobial treatment approach for elbow PJI has not yet been determined. The purpose of this study is to determine if the treatment algorithm developed and commonly used for hip and knee PJI can be applied to elbow PJI.

Achermann et al. performed a retrospective evaluation of 358 elbow prostheses implanted between January 1994 and December 2007 at a single institution. For all episodes of PJI, aspirated fluid and intraoperative periprosthetic tissue specimens were cultured for identification of the causative microorganism at the time of diagnosis. Surgical and antimicrobial treatment was retrospectively reviewed to determine whether the surgeon’s decision was in agreement with the treatment algorithm for hip and knee PJI. Following revision surgery, patients followed up in the outpatient clinic for a minimum of one year to assess for any reoccurring signs or symptoms of PJI.

This study reported a 7.5% (27/358) incidence of elbow PJI with the median time to infection following the last surgical procedure of the elbow being 6 months. The most frequently isolated pathogen was S. aureus (41%; 11/27) followed by coagulase-negative staphylococci (33%; 9/27). At follow up, 70% (19/27) patients were free of infection and 30% (8/27) had a relapse (median time to relapse 0.56 years). The relapse-free survival rate of elbow PJI was 79% (95% CI 63–95%) after 1 year and 65% (95% CI 45–85%) after 2 years. Evaluation of treatment outcomes with respect to the treatment algorithm demonstrated that the 2-year cure rate was only 33% when the algorithm was not followed compared to 100% when the algorithm was followed (p<0.05). Thus, the authors concluded that the treatment algorithm developed for hip and knee PJI can be applied to elbow PJI for appropriate and reliable treatment.