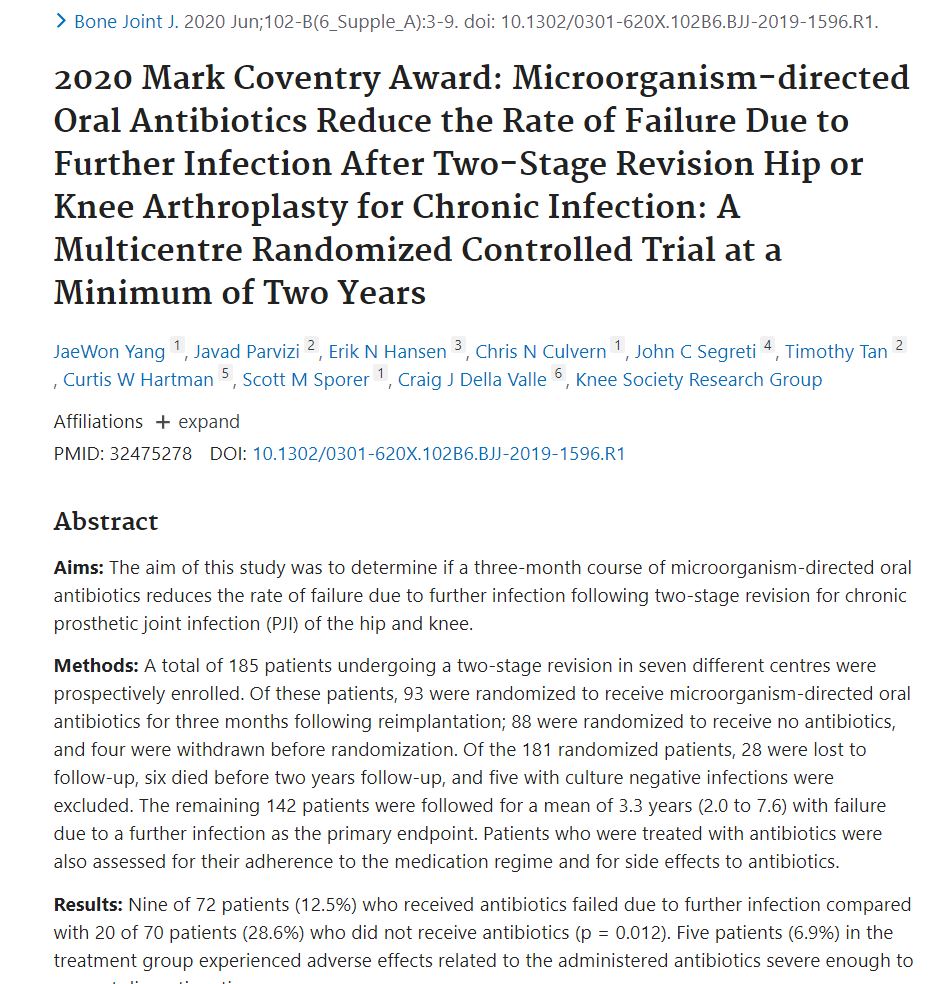 Prosthetic joint infection (PJI) remains a challenging complication of total hip (THA) and total knee arthroplasty (TKA). It is associated with significant morbidity and mortality and imposes a considerable economic burden on the health care system.

Although two-stage revision surgery is considered the gold standard for PJI treatment, only three published studies investigated the role of antibiotic therapy following the reimplantation (i.e. second stage). Two of these studies were retrospective, non-randomized single-center studies with varying durations of antibiotic regimes[1, 2]. The third study was a multicenter, randomized control study, but had a mean follow-up of only 12 months [3]. The purpose of the current study was to follow patients from this latter trial for a longer period to determine if a three-month course of appropriate oral antibiotics following two-stage revision reduced the rate of failure due to further infection at a minimum follow-up of two years.

The study included 142 patients randomized to either antibiotic treatment (n=72) or no treatment (n=70 controls) following reimplantation. At two years, 9 of 72 patients (12.5%) who received antibiotics failed due to further infection compared with 20 of 70 patients (28.6%) who did not receive antibiotics (p = 0.012).

Although the median time to failure of approximately one year in this study was similar to what has previously been reported [4], the current study found that a considerable number of infections occurred within the first 90 days following reimplantation in both the treatment and control groups (22.2% and 55.0%, respectively). The fact that nearly one-fifth of failures due to further infection in the treatment group occurred during this 90-day period highlights how critical this postoperative window is for risk of infection, despite antibiotic administration. Culture results demonstrated that most failures in both the treatment and control groups were caused by new microorganisms (66.7% and 85.0%, respectively, p = 0.339), similar to what has previously been reported [5].  Further work is required to determine whether microorganism-directed or more broad-spectrum oral antibiotic treatment is superior in reducing the rate of failure due to further infection.  Several limitations were acknowledged by the authors. In particular, the study did not blind surgeons and clinical staff to the intervention assignments, a placebo was not administered, and the group missed the targeted sample size. In addition, the study used an outdated definition for determining failure (MSIS 2011). However, by defining failure due to further infection as only involving infections meeting MSIS criteria, the study was able to limit assessor bias, which is common in more complex assessments. Finally, the operating techniques used at the different centers were heterogeneous; however, this may make the findings more generalization.