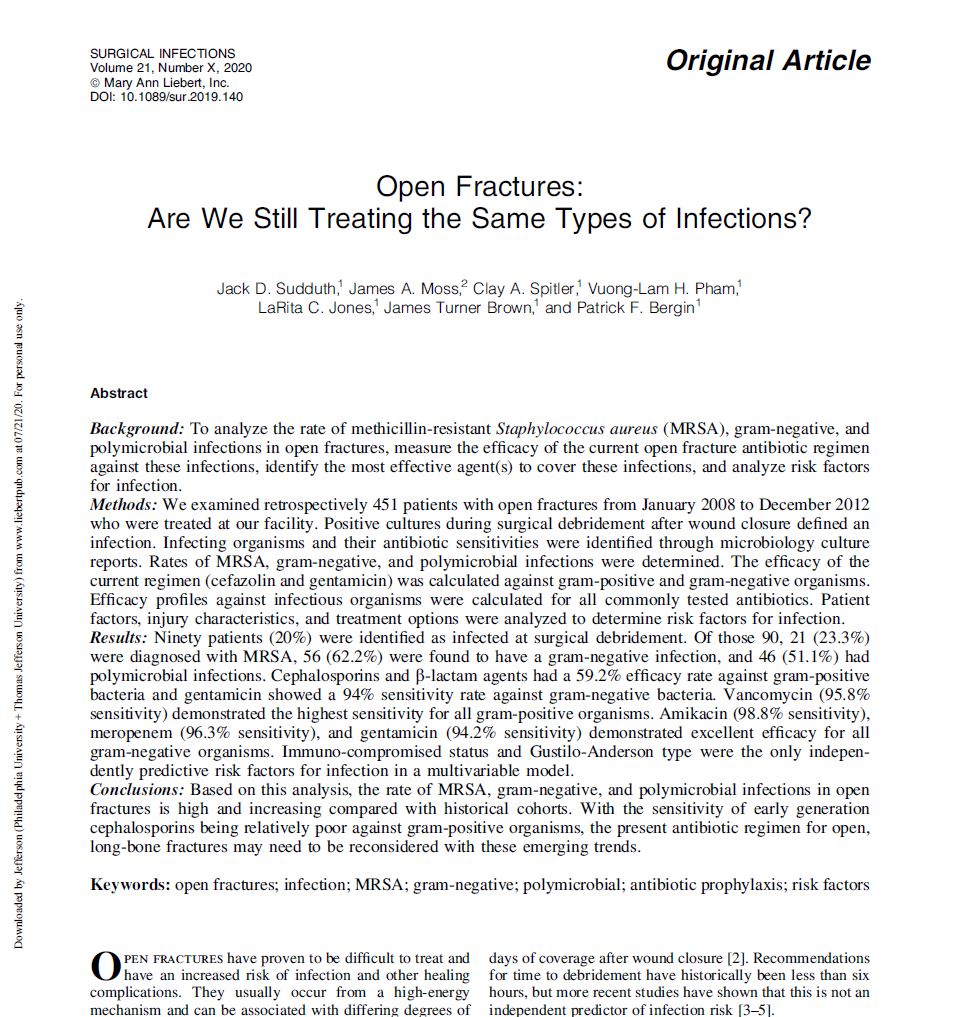 Open fractures have a high risk of infection, requiring rapid antibiotic administration within three hours to decrease the risk of infection.1 Given this need for rapid treatment, the initial choice of antibiotic is critical; yet, three hours does not provide sufficient time for lab culture and sensitivity reports. Initial recommendations for antibiotic treatment for open fractures were established in the 1970’s and suggested that only gram positive coverage was required2. Later studies, performed in 1984, reported increased gram negative bacterial infections3, requiring an update to the initial recommended antibiotic regimen. There is evidence that the complexity of open fracture infections has changed once again3,4. The study by Sudduth et al. examined the spectrum of infectious microorganisms at one institution and the efficacy of their current antibiotic regimen.

In this study, Sudduth et al. retrospectively reviewed 451 patients at a single institution with open fractures over a 5 year period (2008-2012). Almost one quarter of these open fracture patients (23.3%) were infected with MRSA. A majority had gram negative bacteria in their culture report (62.2%) and half (51.1%) of patients had a polymicrobial infection. Infection rates varied significantly (P<0.001) across Gustilo-Anderson fracture types, increasing from 5.1% for Type I to 47.3% for Type IIIB/ Type IIIC fractures. However, there was no significant difference in infection complexity based on fracture classification. The gram positive infectious organisms were sensitive to beta-lactam or early generation cephalosporin antibiotics only 59.2% of the time.

Based on their results, the authors concluded that the rate of MRSA, gram negative, and polymicrobial infections in open fractures is increasing. They believe that the antibiotic regimen for long bone fractures needs to be reexamined given the concurrent growth in antibiotic resistance. Limitations of this study include that it was performed at a single institution and that it is retrospective in nature. In addition, full antibiotic sensitivity reports were not available for all patients.