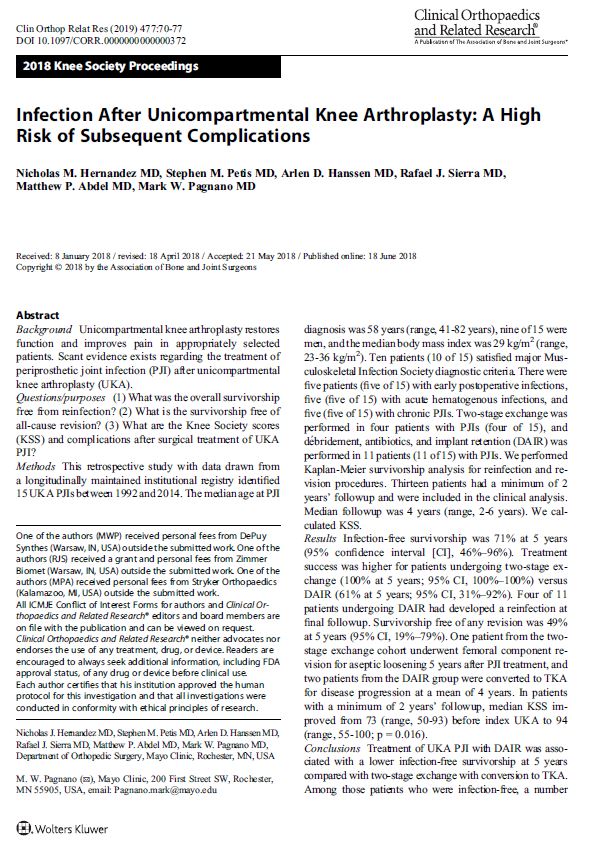 Unicompartmental knee arthroplasty (UKA) is a suitable alternative to total knee arthroplasty to treat osteoarthritis localized to a single compartment of the knee. From 1998 to 2005 the incidence of UKA’s performed in the United States increased by approximately 700% [1]. Despite the increased popularity of UKA, there is a paucity of data regarding the treatment of peri-prosthetic joint infection (PJI) in UKA patients. Specifically, it remains unclear whether PJI in UKA patients should be addressed by debridement, antibiotics, irrigation or re-implantation (DAIR) or whether treatment should mirror that of PJI in total knee arthroplasty (TKA), in which two-stage exchange is routinely performed. Furthermore, for patients who undergo the less aggressive DAIR approach, two potential sources of failure that are unique to UKA compared to TKA are infection of the native cartilage and progression of osteoarthritis. The purpose of the study by Hernanadez et al. was to separately evaluate the survivorship free from reinfection and the survivorship free from all-cause revision after treatment of UKA PJI.

Hernandez et. al identified a cohort of 15 patients out of a total of 1440 UKA’s that were performed between 1992 and 2014 and met the diagnostic criteria for PJI as outlined by the Musculoskeletal Infection Society (MSIS) [2]. Eleven of the 15 patients were treated with DAIR while 4 patients were treated with two stage exchange. Eight of those 11 DAIR patients had polyethylene exchange. Two stage exchange surgery was performed by removing all components, performing tibial and femoral cuts for insertion of TKA components, and placement of non-articulating antibiotic spacer. In addition to survivorship, the authors also reported Knee Society Scores and complications after treatment of UKA PJI.

Of the 15 patients, 1 died and 1 was lost to follow up. Survivorship free of reinfection after UKA PJI for the total cohort was 71% (95% CI [46%-96%]) at 5 year follow up. For those who underwent DAIR as the initial treatment for PJI, the 5 year survivorship free of reinfection was 61% (95% CI [31%-92%]) while survivorship was 100% for those who underwent two stage exchange as the initial treatment. These results are in agreement to the results obtained with DAIR for TKA [3-5].  Four of the patients in the DAIR cohort developed a reinfection at final follow up, and of those, 3 underwent two stage exchange and 1 underwent subsequent DAIR. Survivorship free of any reason for revision was 49% at 5 year follow up. Two knees, both in the DAIR group, underwent revision to TKA for progression of arthritis and one patient in the two-stage exchange group underwent revision for aseptic femoral loosening. Knee Society Scores improved from 73 before the index procedure to 94 at minimum 2 year follow up. One patient developed a deep vein thrombosis; this was the only complication observed, excluding the aforementioned infections and revisions.

The results of this study suggest that two stage exchange is a superior treatment method to Debridement, Antibiotics, Irrigation, and reimplantation for PJI treatment in UKA, in agreement with what has previously been reported [6]. However, limitations of the study include the small sample size and limited follow up, thereby precluding analysis of risk factors. Furthermore, patients may have had recurrence of PJI, but pursued treatment at an outside hospital. There was no control group or standard protocol for treatment of PJI; while patients who had a longer duration of PJI or greater severity of PJI were treated with two stage exchange as the initial treatment, there may have been exceptions.