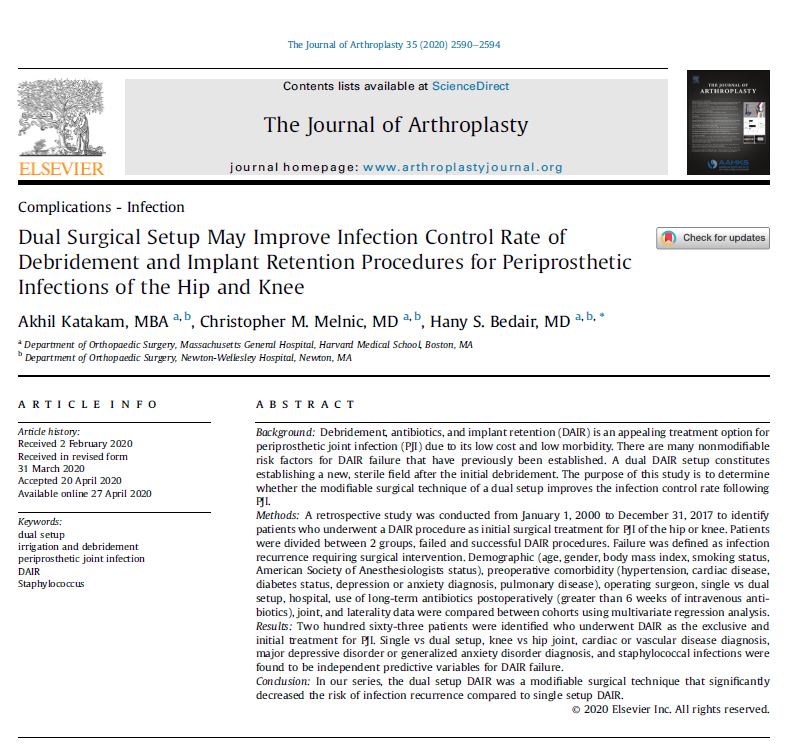 The authors of this retrospective study explored the usage of a modified surgical technique during treatment of periprosthetic joint infection (PJI) with the aim of reducing the rate of re-infection after treatment of PJI. Current methods for treatment of PJI include debridement, antibiotics, and implant retention (DAIR). The modified technique used by the study authors involved the use of a dual-DAIR surgical setup, which required re-establishing a new sterile field after the initial debridement. After the initial debridement, all surgical instruments were removed from the field and the wound was covered. All surgical materials and coverings including drapes, lavage, suction, instrument table, and light handles were removed and replaced with new sterile ones. In addition, the surgical team left the room, rescrubbed and obtained new sterile gloves, gowns, and masks. The remainder of the procedure was performed, the wound was irrigated, and new components were inserted. The authors state that frequently the surgical field, team, and instruments used in the initial debridement remain the same during the insertion into the wound and closure of the sterile site. However, this may allow for direct exposure to intraoperative contamination, which the authors discuss as a potential route for infection.  A dual-DAIR setup aims to reduce this route of exposure to infection by re-establishing a sterile field after debridement.

The authors identified 263 patients who had underwent DAIR as the initial and exclusive treatment for PJI at a single healthcare system between January 2000 and December 2017. Patients were categorized into failed (n=110) or successful (n=153) treatment groups; failed was defined as reinfection requiring surgical intervention. Of these 263 patients, 20 had undergone a dual-DAIR setup for treatment of PJI. The authors observed that the dual-DAIR cohort had a 75% infection control rate, reducing infection recurrence, which was significantly improved compared to the single set-up cohort (p =0.043).  In addition, using multivariate regression, the authors reported that single setups (vs. dual setups), knee joint (vs hip joint), cardiac or vascular disease, major depressive disorder or general anxiety disorder diagnosis, and staphylococcal infections were predictive variables of DAIR failure. Notably, 55.5% of joints were infected with staphylococcus in the failed group and 37.3% were infected with staphylococcus in the successful group. These results suggest that a dual-DAIR setup may reduce re-infection rates for lower extremity total joint arthroplasty. Primary limitations of the study include the retrospective study design and unspecified decision process by which surgeons opted for dual vs. single stage DAIR.