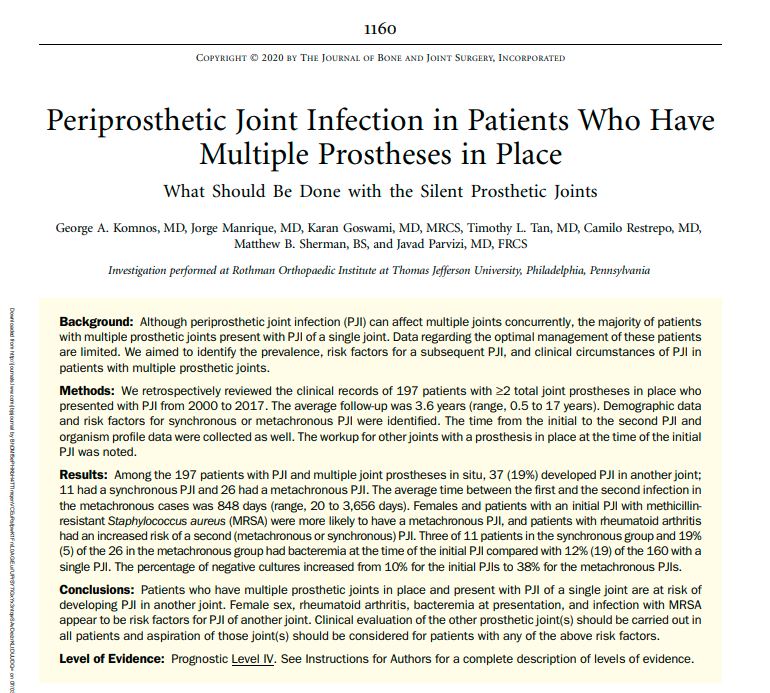 As the number of total joint arthroplasties performed increases every year, it is estimated that up to 45% of patients with a joint replacement may have more than one prosthetic joint.1 In patients presenting with periprosthetic joint infection (PJI) of one joint with multiple prosthetic joints, it becomes important to consider evaluating the other “silent” prosthetic joints for PJI. However, the few studies that have investigated multiple-joint PJI with limited sample sizes have found the prevalence to range from 6.3% to 20%.2–5 Currently, there is no gold standard diagnostic protocol for multiple PJI.

In this study, Komnos et al. looked to determine the prevalence of multiple-joint PJI and its associated risk factors to outline an optimal diagnostic practice. They retrospectively reviewed 197 patients who were diagnosed with PJI and had more than one joint replacement at the time of presentation. Of these patients, 37 (19%) developed a subsequent PJI in a second joint with 11 (30%) considered synchronous (diagnosed and treated during admission for the initial PJI) and 26 (70%) considered metachronous (not diagnosed during admission for the initial PJI). The female sex and rheumatoid arthritis were significantly associated with developing a subsequent PJI (p = 0.012, p < 0.001). Additionally, 27% (3/11) of patients with a synchronous PJI presented with bacteremia at their initial PJI, which was significantly different from the single-PJI group (p = 0.027). Staphylococcus aureus (MSSA) and methicillin-resistant S. aureus (MRSA) were the most predominant isolates during both the initial and subsequent PJI. MRSA isolates during the initial PJI were found to significantly increase the risk of metachronous infection (p = 0.034). Interestingly, the percent of negative cultures increased from 10% in initial PJI to 38% in metachronous PJI.

Although an optimal diagnostic protocol for multiple PJI remains unknown, the study highlights risk factors associated with subsequent PJI of another prosthesis, including the female sex, rheumatoid arthritis, MRSA infection, and bacteremia. Additionally, the percent of culture-negative PJI was found to be much higher in metachronous infections, identifying the need to identify these infections early on. The findings of the study reveal the need for physicians to conduct a thorough clinical evaluation for patients with multiple joint prostheses and PJI in one joint. Additionally, they should consider aspiration for patients with the identified risk factors. Limitations of the study include its retrospective nature, small sample size, and the variability in multiple-joint PJI clinical evaluation.