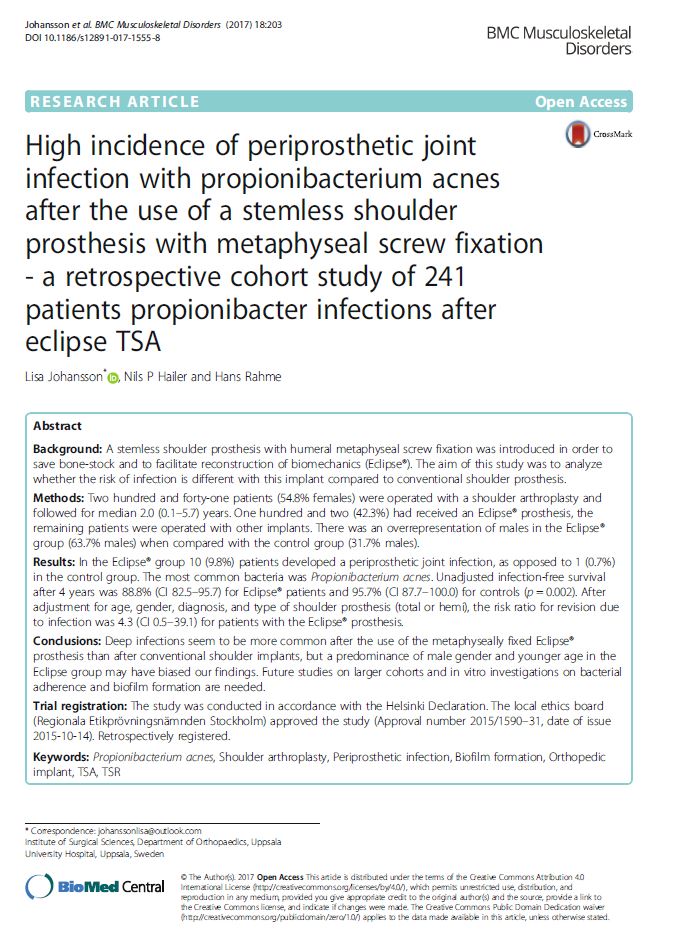 Periprosthetic infection is a rare complication following shoulder arthroplasty.  Today Propionibacterium acnes (P. acnes) has emerged as the most common pathogen in implant-associated shoulder infections. The Eclipse® prosthesis is a stemless shoulder prosthesis enabling anatomic reconstruction of the center of rotation independently from the head and shaft relationship. At the authors institution (Institute of Surgical Sciences, Department of Orthopaedics, Uppsala University Hospital, Uppsala, Sweden) it was observed that a larger than expected number of patients treated with this prosthesis returned with signs of periprosthetic infection, requiring subsequent revision surgery. This observation triggered a suspicion that this specific device might be associated with a higher risk of infection.

In this study, Johansson et al. wanted to evaluate the infection rate after shoulder replacement with the Eclipse® prosthesis and to compare it with the infection rate following other shoulder replacements at their department. Between September 2008 and October 2012, 241 patients (54.8% females) underwent a shoulder arthroplasty and followed for a median of 2.0 years (0.1–5.7 years). One-hundred and two (42.3%) of these patients had received an Eclipse® prosthesis while, the remaining patients received one of the other five different types of shoulder prosthesis used at the authors’ institution during that time period (Bigliani, CTA, Delta, Epoca, Univers).

This study showed deep infections with P. acnes to be more common after the use of the Eclipse® prosthesis than after conventional shoulder implants. It should be noted that there was an overrepresentation of males in the Eclipse® group (63.7% males) when compared with the control group (31.7% males); it has previously been reported that males have an increased likelihood of P. acnes colonization. Other weaknesses of this study include the retrospective study design and the lack of reliable data on medical comorbidities. It is possible that the described prosthesis is more prone to bacterial colonization, but in vitro investigations on the ability of different bacteria to colonize this implant, are needed to determine this hypothesis. Until further evidence is presented to contradict their findings, authors of the study have chosen to refrain from using this specific implant.