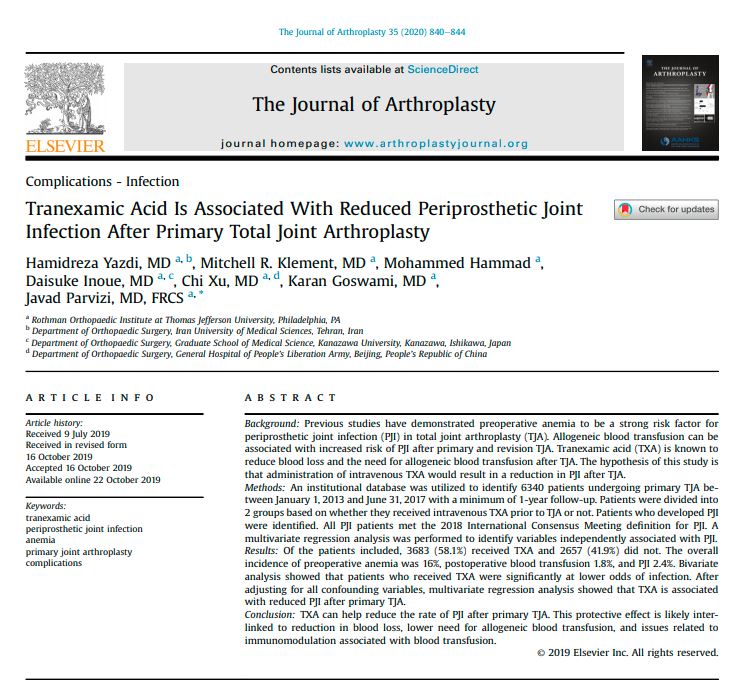 Periprosthetic joint infections (PJI) have an incidence rate of 1-2% following total joint arthroplasties (TJA) and are a costly and dangerous complication [1,2]. Considering that an estimated four million TJA’s will be performed annually in the United States by the year 2030, the number of patients who will, and are currently impacted by PJI is immense [3]. Indeed, PJI is one the primary motivators for TJA revisional surgeries, which will cost the US healthcare system an estimated $13 billion dollars in 2030 [4,5,6]. Two known risk factors for PJI include preoperative anemia and perioperative bleeding leading to allogenic blood transfusion [7,8]. Previous studies have found the antifibrinolytic drug tranexamic acid (TXA) to reduce incidences of these two risk factors [9,10].

In this study, Yazdi et al sought to investigate if TXA could successfully reduce incidences of PJI following primary TJA. Between January 2013 and June 2017, a total of 6,340 patients were identified who had undergone primary THA or TKA, who had at least 1 year follow-up data. This population was 46.2% males, had a mean age of 64.7 years, and mean follow-up time of 26.3 months. The cohort was split into two separate groups, 3,683 patients who had received intravenous single dose TXA 20-30 minutes prior to incision, and another 2,657 who did not. Over 90% of subjects were prescribed low dose aspirin for 4 weeks following surgery as an antithrombotic.

This study found TXA to be effective in reducing rates of PJI following primary TJA. While mechanism of prevention is unknown, authors speculate linkage to lowered perioperative bleeding, and thus reduced need for allogenic transfusion with immunomodulation. However, as a retrospective study it is likely that the data was incomplete. Further limitations include the fact that subjects were not matched, and health records were sourced from a tertiary referral center that performed a low volume of TJA, preventing complete generalizability to other facilities. Future confirmational studies are potentially needed to supplement these findings.