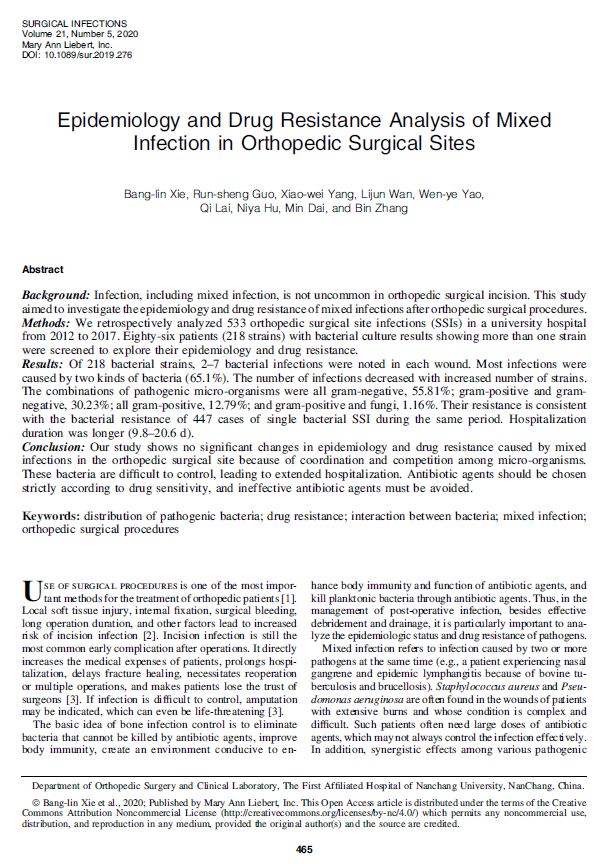 A common complication of orthopedic surgery is infection of the surgical incision site. Surgical site infections can develop from a single organism or arise from “mixed infections,” in which two or more organisms are involved. Due to the synergistic effects of multiple organisms (i.e. synergistic gangrene), mixed infections require higher doses and longer durations of antibiotic treatment. Mixed infections are also more likely to be undertreated compared to single-organism infections. Although there have been studies on the interactions of bacteria at the microscopic level, very few studies have reported on the interactions of bacteria at the macroscopic level of the human ecological environment. The study by Xie et. al. sought to identify which organisms comprise mixed surgical site infections and whether antibiotic resistance or the location of the infection differ between mixed infections and single-organism infections.

Xie et. al conducted a retrospective study by analyzing orthopedic surgical site infections of 544 patients, all treated at Nanchang University’s First Affiliated Hospital between March 2012 and July 2017. Of those patients, 86 were found to have mixed infections, as determined by blood culture. The researchers used VITEK-2 Compact automatic bacterial tester to identify the causative pathogens and drug sensitivities of the mixed infections.

Of the 86 infection patients included in the study, two-hundred eighteen bacterial strains were found. One-hundred fifty-two (69.72%) were gram negative, 65 (29.82%) were gram-positive, and there was one fungus involved (0.46%). The study identified four possible combinations of pathogenic bacteria: gram negative only (55.81%), gram negative and gram positive (30.23%), gram positive only (12.79%), and gram positive bacteria mixed with fungi (1.16%). Regarding bacterial sensitivity, gram negative bacteria showed high resistance to ampicillin (82%), aztreonam (70%), and amoxicillin/clavulanate (75%); whereas gram positive bacteria showed high resistance to ampicillin (100%) and amoxicillin/clavulanate (75%). Nearly one-third (32.56%) of the infections were at the foot; 23.47% were on the torso, 16.96% were on the forearm, 15.81% were at the knee, and 10.93% were located on other areas.

Overall, the researchers found that there was no difference in drug resistance between mixed infections and single organism infections. Further, the quantity and distribution of bacteria were similar between the two infection type groups. However, because mixed infections tend to be more severe than single agent infections, treatment requires use of a tailored antibiotic regiment when more than one type of bacteria is present. The study authors did not report surgical details, such as type of procedure or whether instrumentation was used. Additional limitations include the absence of patient demographics and failure to report the results on any statistical test while also not reporting summary data for location and quantity of bacteria in the single organism cohort.