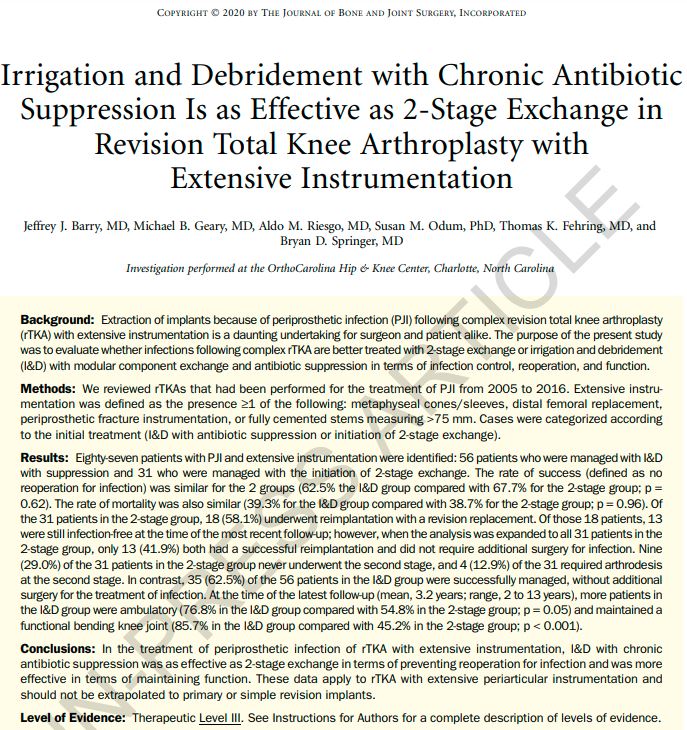 Periprosthetic joint infection (PJI) is a rare but devastating and costly complication following total knee arthroplasty (TKA).1.2 Common treatment options include 2-stage exchange or I&D with antibiotic suppression, both of which are widely reported in the literature for the treatment of PJI after TKA.3 Less understood is the treatment of  PJI following revision TKA (rTKA), which can be particularly challenging, especially in the setting of extensive instrumentation.4

In this study, Barry et al. retrospectively investigated the outcomes of two different treatment options – 2-stage exchange or I&D with antibiotic suppression – for PJI in patients with rTKA with extensive instrumentation. Extensive instrumentation was defined as having one or more of the following characteristics: metaphyseal cones/sleeves, distal femoral replacement, periprosthetic fracture instrumentation (plate, nail, or both), or fully cemented stems measuring longer than 75 mm. Thirty-one patients were treated with 2-stage exchange and 56 patients underwent I&D with poly exchange and antibiotic suppression. There were no differences between the two treatment groups in duration of follow up, basic demographics, or perioperative characteristics, except for the 2-stage group having longer duration of preoperative symptoms and more patients with loose components.

This study’s findings suggest that 2-stage exchange and I&D with antibiotic suppression result in similar rates of PJI control in patients with rTKA with extensive instrumentation. Additionally, I&D may result in more favorable functional outcomes in this specific patient population. This study’s retrospective nature introduces the inherent selection bias in treatment choice for patients in the two groups. Additionally, this study included patients treated by 8 surgeons over a 12 year period, with potential heterogeneity in treatment and management. Further studies with larger cohorts are needed to substantiate these findings.