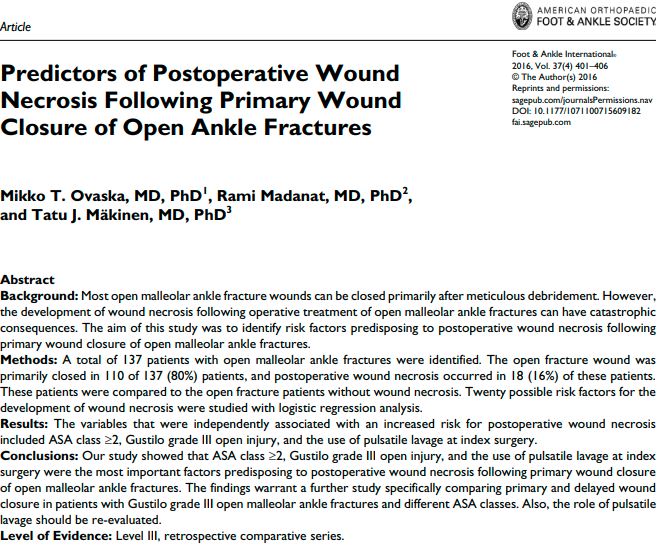 Open malleolar ankle fractures present challenges to orthopedic surgeons in the postoperative setting. Although most open malleolar fracture wounds can be closed primarily after copious irrigation and debridement 1,2, wound necrosis may occur in up to 20% of patients.3 The high necrotic infection rate is primarily due to the fracture and wound’s direct exposure to the environment, which makes adequately cleaning the wound and preventing subsequent infection increasingly difficult. Previous study has shown that the primary infective organism in these open fractures is nosocomial, which indicates that earlier wound closure may be beneficial.4 However, there is little information in the literature with regards to patient and operative risk factors for postoperative necrotic wound infection, which this study addresses.

Here, Ovaska et al. perform a retrospective single-institution review of patients undergoing open malleolar fracture operations from 2006-2011. During that time, 137 patients with open ankle fractures were identified, while primary wound closure was undertaken in 110 patients, excluding those 27 in which the wound was primarily left open. Of those 110 patients, 18 (16%) developed a postoperative necrotic wound. The necrotic cohort was compared against the remaining 92 patients without incidence of necrotic wound. Patient demographics were collected for comparison. Patients were also stratified by fracture type, Weber lateral malleolar classification, and wound grading via the Gustilo Open Ankle Fracture Classification.

Following cohort comparison, univariate and multivariable logistic regression analysis found that a most severe wound grade (wound type III) was significant for postoperative necrotic wound (p=0.003), as well as the use of pulsatile lavage during surgery (p=0.038). Weber classification for fibular fracture (A/B/C/None) and overall fracture type (Uni/Bi/Tri-malleolar) were not significant for necrotic wound. Additionally, high-energy mechanism of injury was not found to be significant (vs. low-energy), and neither was the location of the open wound (medial vs. lateral). Patients with diabetes had necrotic infection more often which approached, but did not reach, significance (p=0.066). Similarly, necrotic patients had slightly larger median wound size (7cm vs 5cm, p=0.083) and were not as likely to have immediate internal fixation (p=0.069).

The authors conclude that Gustilo grade III wound is a significant factor predisposing to wound necrosis, and recommend that such wounds should not be primarily closed in many cases. They also recognize that pulsatile lavage may not have a beneficial effect on outcome, and that further study is necessary directly comparing patients with and without pulsatile lavage. The study is limited in its relatively small enrollment number as only 18 necrotic patients could be identified for comparison. Additionally, multiple qualified observers graded wounds, which opens up the possibility of interobserver variability. Finally, 64% of Gustilo grade III patients received pulsatile lavage while only 44% of grade I-II patients did, which may affect that particular finding.