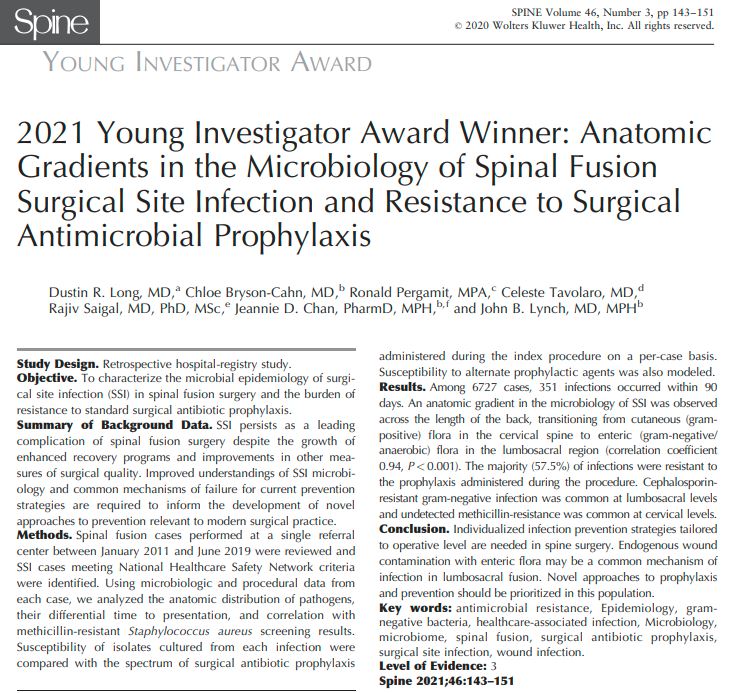 There were 351 surgical site infections identified from 6,727 cases performed (5.2% SSI rate). The highest and lowest vertebral levels involved in each SSI case were recorded, including any non-instrumented procedural elements. Two-stage procedures were recorded as a single case. Antibiotic administration was uniform across procedure types. After excluding cases with pre-existing infection (n=22), receiving non-standard antimicrobial prophylaxis (n=19), or in which culture acquisition was not attempted (n=2), the final cohort was 308. Most infections were monomicrobial (55.2%; n=170). Of the monomicrobial infections, 79.4% were caused by cutaneous flora and 20.6% were caused by enteric species. Polymicrobial infections comprised 43.5% (n=135) of cases. Among the polymicrobial infections, 22.4% involved only cutaneous organisms, 44.8% involved only enteric organisms, and 32.8% comprised a combination of both. Gram-negative infections were more likely to be polymicrobial and presented earlier than gram-positive infections (P<0.001).

Stratifying by operative level, there was a transition from gram-positive skin organisms in the cervical spine to a predominance of gram-negative enteric organisms in the lumbosacral spine, with an inflection point at approximately the T3-4 level. Stratifying by the lowest vertebral level involved, the inflection point between gram-positive and gram-negative infection occurred near the thoracolumbar junction. One-hundred seventy-seven cases (57.5%) grew at least one organism resistant to the prophylaxis administered during the index procedure. Among resistant organisms, cefazolin-resistant enteric species were the most common (58.4%). Bacteria in this class were predominantly cultured from lower thoracic and lumbosacral regions. Methicillin-resistant gram-positive infections among patients not receiving vancomycin was the next most frequently occurring resistant class (38.9%). These occurred predominantly in the cervical and upper thoracic regions and most often involved methicillin-resistant S. aureus (42.2%).

This study demonstrated that the microbiology of SSIs in spinal fusion surgeries varies along the length of the spine. Given their findings, the authors suggest that infection prevention strategies be tailored to the operative level(s) involved. The study was a single-center study, so generalizability of the findings to other practice settings is unknown. Furthermore, the findings were not adjusted for any patient or procedural specific factors.