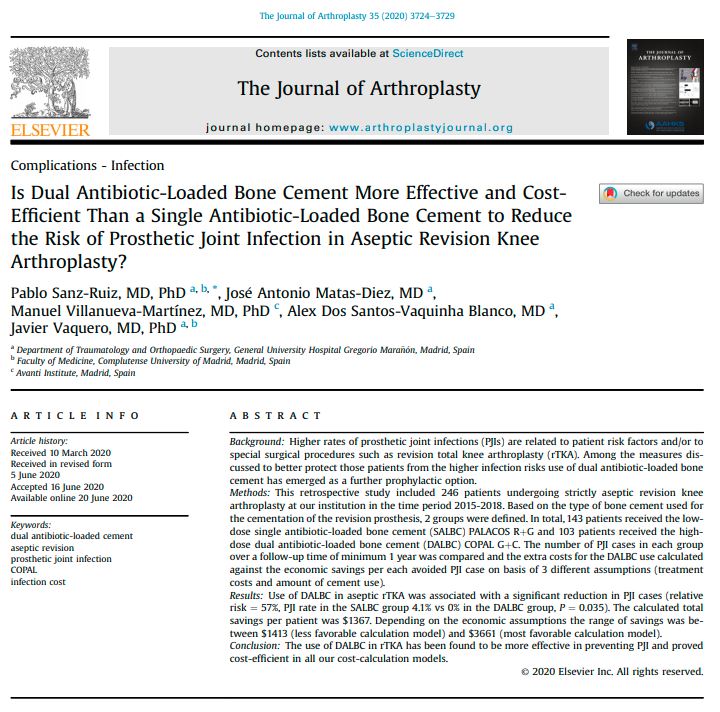 The authors of this retrospective study explored prophylactic usage of two different antibiotic-loaded bone cements (ALBC) against prosthetic joint infections (PJI) and their cost efficiency.  The two types of risk-adapted cements included the current standard of a low dose single antibiotic-loaded bone cement (SABLC) and a high dose double antibiotic-loaded bone cement (DABLC). With the known higher risk of infection in revision total knee arthroplasty (rTKA) than primary TKA, it is important to analyze whether a more potent ALBC would control this risk. For this study, 246 patients who underwent strictly aseptic revision total knee arthroplasty between the years 2015-2018 were separated into two groups. Group 1 received SABLC (n=143, control) and group 2 received DABLC (n=103). The SABLC contained 0.5 g of gentamicin which differed from the DABLC which contained 1.0 g of gentamicin and 1.0 g of clindamycin.  In order to determine the occurrence of PJI in both groups, the number of PJI cases were recorded over a minimum follow-up period of 1 year. The results revealed six PJI cases in the SABLC group (4.1%) compared to zero in the DABLC group (0%, p=0.035), which amounted to a 57% reduced risk of PJI using DABLC.

Knowing the cost of rTKA to be substantially higher than primary TKA, the extra cost to use DABLC was calculated against the economic savings per each avoided PJI case. The cost of preventing infection in the DABLC group was calculated by adding the cost of using DABLC and median number of DABLC packages used against SABLC use (2.49 vs 2.55), divided by the number of avoided infections and their cost savings. Based on previously published data of costs, the authors created an economic model to explore possible extra costs and savings which calculated a net saving of USD1,367 per patient using DABLC and USD140,740 for the entire DABLC group. In addition, depending on cement packages used, predicted savings fell between USD1450 and USD3670 per patient.

These findings confirmed the authors’ hypothesis that using DABLC may reduce risk of PJI and be cost-effective compared to SALBC. Limitations of the study include its retrospective design and the fact that the cost calculation for SALBC used published costs in the United States and Europe, while the extra cost of DALBC only included European Union data, due to the fact that DABLC is not available in the United States.