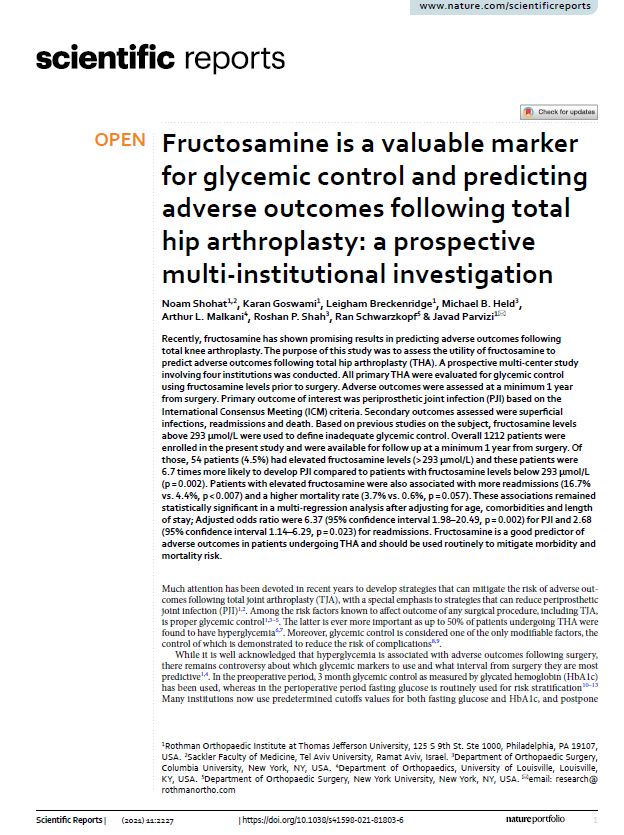 In recent years much emphasis has been placed on developing strategies to reduce periprosthetic joint infections (PJI) following total joint arthroplasty (TJA) [1][2]. Poor glycemic control has been shown to be associated with adverse surgical outcomes in a number of specialties including orthopedics [1,3-5], but controversy still remains as to which serum indicator of glycemic control is most appropriate for clinical use [1][4]. Fructosamine is a promising alternative to the current gold standard of HbA1c, due to its comparatively rapid response time to changes in blood glucose concentrations. While HbA1c levels adapt within a period of 3 months to changes in glycemic control, fluctuations in serum Fructosamine can be observed within 2-3 weeks [6][7]. The ability to assess glycemic control at a time much closer to the operative date presents significant advantages when attempting to accurately risk stratify TJA patients.

In this study, Shohat et al sought to determine if preoperative serum Fructosamine levels could successfully predict the incidence of PJI, and a number of other adverse outcomes following primary total hip arthroplasty (THA). Between August 2017 and November 2018, 1,212 primary THA patients from four academic institutions were consented to participate in this study. Patients were followed for adverse outcomes for 1 year postoperatively. This population was 50.8% female and had a mean age of 63.9 years. A total of 54 patients (4.5%) had serum Fructosamine levels ³293 mmol/L -a validated cutoff for poor glycemic control [8].

Assuming an alpha of 0.05 and power of 0.8, the minimum sample size of 1,100 patients was met. Categorical variables were analyzed using the Chi square test and continuous variables by the Student’s t-test. Logistic regression models were constructed using the demographic, comorbidity and hospitalization variables that differed significantly between patients with high (³293 mmol/L) and normal (<293 mmol/L) serum Fructosamine. The threshold for significance was predetermined to be p<0.05. After controlling for significant patient variables, this study found preoperative serum Fructosamine levels ³293 mmol/L to be predictive of PJI and hospital readmissions following THA. Due to the observational nature of this study, a causal relationship cannot be confirmed between poor glycemic control as indicated by high Fructosamine levels and PJI/readmissions. Furthermore, these findings are limited by potential differences in Fructosamine reading procedures at each study site, and an exclusion of medical conditions that impact serum Fructosamine from the analysis. Additional research is needed to further develop the linkage between serum Fructosamine and TJA outcomes.