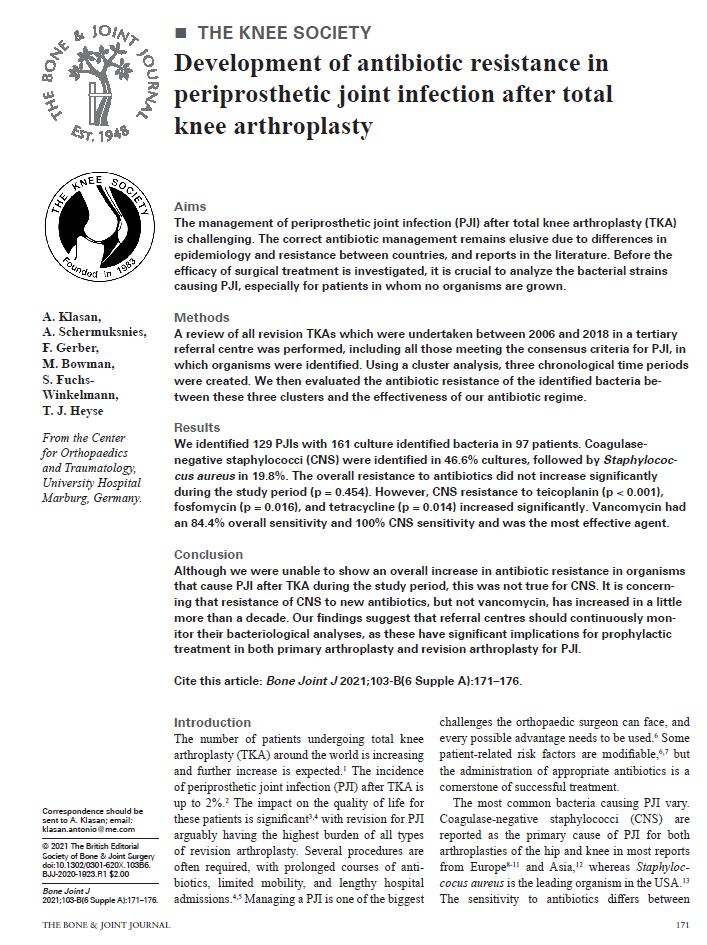 Managing PJI after TKA remains a difficult challenge. Successful treatment of PJI is largely contingent on the administration of appropriate antibiotics. The most common pathogens associated with PJI vary globally across continents with Staphylococcus aureus being the most prevalent in the U.S.1, and Coagulase Negative Staphylococci (CoNS) being the most common in Europe2-5. Considering that PJI-causing pathogens vary from place to place and continue to change over time, it is expected that sensitivity to antibiotics will also vary3.

Klasan et al. reviewed all revision TKAs undertaken between January 2006 and December 2018 at a tertiary care center in Germany. Tissue samples collected during the revision procedures were used to investigate whether antibiotic resistance had emerged at their institution and whether their antibiotic regiment remained effective. The primary outcome of the study was the change in antibiotic resistance over time for Staphylococcus Aureus (S. aureus) and Coagulase-Negative Staphylococci (CoNS); the two most common causes of PJI.The secondary outcome was the sensitivity of the institution’s standard antibiotic regimen (vancomycin + rifampcin) vs. other reported regimens (gentamicin + teicoplanin).

The authors concluded that antibiotic resistance did not increase overall but did so for CoNS, particularly to newer antibiotics. Local bacteria resistance should be monitored in high volume revision arthroplasty centers. However, these findings are limited due to the retrospective methodology and incomplete patient histories for any previous antibiotic treatments. In addition, sample sizes for non-CoNS bacteria were insufficient to adequately assess temporal changes in resistance.