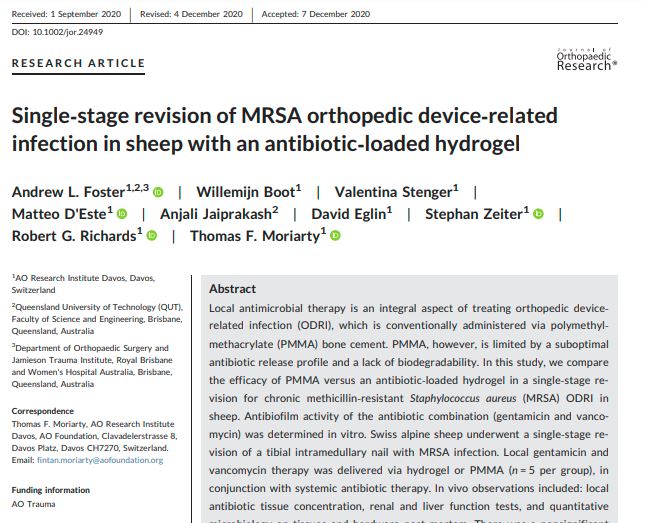 Orthopedic device-related infection (ODRI), which includes periprosthetic joint and fracture-related infections often require subsequent surgical procedures and a long course of antibiotic therapy. Local antimicrobial therapy delivered via polymethyl-metacrylate (PMMA) bone cement can treat ODRI by delivering a high local concentration while minimizing systemic antibiotic exposure [1-2]. However, this method has a failure rate of up to 30%, often due to insufficient release of antibiotics from the PMMA after the initial early burst release phase [3-4]. To overcome this limitation, antibiotic-loaded hydrogels have been developed as a bioresorbable method of local antibiotic delivery. The study by Foster et al. compared the antibiotic delivery and efficacy of hydrogel vs. PMMA in a single-stage revision for methicillin-resistant Staphylococcus aureus (MRSA) ODRI in a large animal model.

For this study, local gentamicin and vancomycin therapy was delivered via hydrogel or PMMA (n=5/group) as part of a single-stage revision of a tibial intramedullary (IM) nail with chronic MRSA infection in Swiss alpine sheep, in conjunction with systemic antibiotics starting on postoperative day 1. At the revision procedure, the IM nail, a swab of the IM canal, and the removed hardware were retained for microbiological analysis. Eight weeks after the revision procedure, the sheep were euthanized and three bone, three soft tissue, and bone marrow samples were removed and homogenized. Anterior-posterior and lateral radiographs were obtained pre and post primary and revision procedures and following euthanasia. The interlocking bolt and IM nail were removed and sonicated in PBS for 3 minutes.  Data were combined from the samples such that each sheep had a cumulative microbiological result. Blood samples were collected preoperatively and at 3 hours, 1 day, and 3 days following the revision procedure.

At the revision procedure, all sheep were infected with an ODRI with no statistically significant differences in the number of colony-forming units (CFU) from the microbiological analysis of the bone marrow and hardware. Following euthanasia, 4 sheep in each group were culture-negative for S. Aureus. There was no development of resistance against the antibiotic used. Gentamicin concentrations in the extracellular fluid within the IM canal were 10-100 times higher in the hydrogel vs. PMMA group over the first 2 postoperative days; from days 2-12, levels were comparable between the two groups. Vancomycin concentrations in the hydrogel group were about 1 order of magnitude higher compared to the PMMA group for the first 3 postoperative days.

The authors concluded that the antibiotic-loaded hydrogel treated MRSA ODRI in a single-stage revision demonstrated equivalent outcomes to using PMMA. The hydrogels achieved a 10-100 fold increase in local antibiotic concentrations without adverse effects in the kidney or liver. Benefits of using hydrogels over PMMA include the biodegradable properties of hydrogels, which do not need to be removed at a later date, and the ability of hydrogels to be used with commercially available implants. The study was limited by the lack of a negative control and the unreliability of white blood cell count, C-reactive protein, and erythrocyte sedimentation rate as markers of infection in sheep.