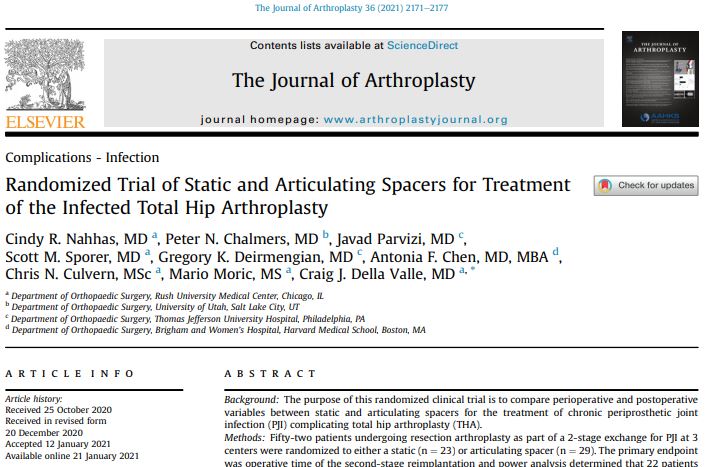 Periprosthetic joint infection (PJI) is one of the more severe complications that can occur following total hip arthroplaty.1 In addition to a sustained courses of intravenous antibiotics, PJI is often treated surgically by a 2-stage exchange. The first stage of this procedure entails the removal of the infected implant and placement of a temporary antibiotic spacer. Once the infection is considered cleared, reimplantation occurs in the second stage.2 Although this is widely accepted as the mainstay treatment for PJI, the type of antibiotic spacer – static or articulating –  is controversial.2-4 It has previously been postulated that the articulating spacer would shorten second-stage operative time, as the leg length and soft tissue tension would be preserved.

This study by Nahhas et al. compared perioperative outcomes between patients who received either a static or articulating spacer in a randomized clinical trial. Fifty-two patients across 3 institutions were randomly assigned to either a static (n=23) or an articulating spacer (n=29) and followed for a mean of 3.2 years. The primary outcome was operative time of the second-stage reimplantation. Secondary outcome measures included length of hospital stay, need for blood transfusion, discharge disposition, failure secondary to infection, need for reoperation, other complications, and the Harris Hip Score.

Nahhas et al. concluded that, while overall outcomes did not differ significantly between the two groups, the significantly longer hospital stay observed in the static group may have important economic consequences. This should be weighed against the higher cost of the articulating spacer itself. This study was limited by a small sample size, which was powered for the primary outcome, but none of the secondary outcomes. Further, the antibiotic regimen, implants used at reimplantation, and postoperative rehabilitation were not standardized throughout.