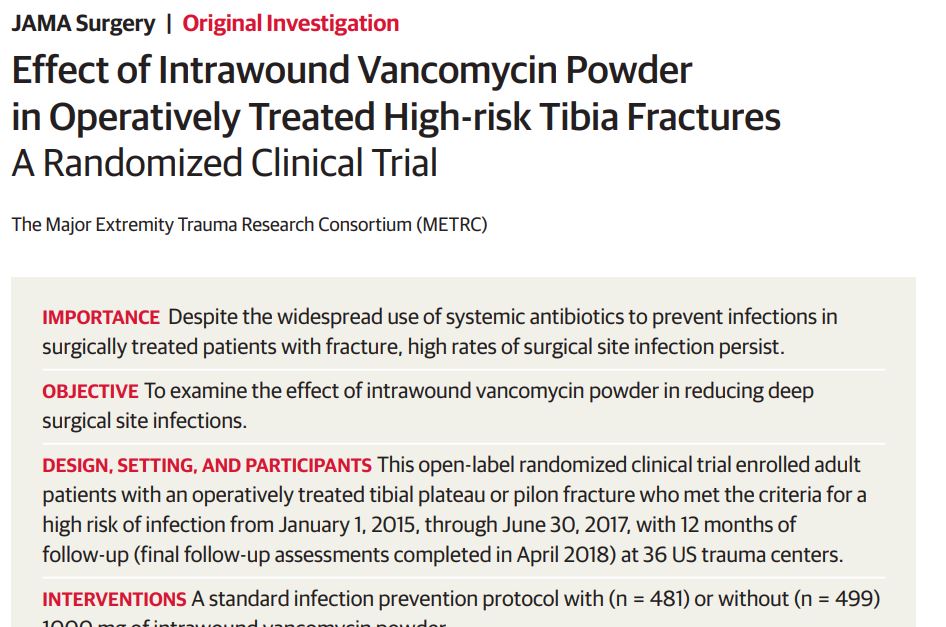 Infection after fracture fixation is a major issue in orthopedics that presents a significant challenge despite the widespread use of IV antibiotics. When fractures occur, blood supply to the damaged tissue is often compromised, making it more difficult for IV antibiotics to reach the injury site. Conversely, local antibiotics are not dependent on blood flow and can deliver high drug concentrations to poorly perfused areas.1,2 Given the promise that local antibiotics have shown in other areas of orthopedics,3,4 this randomized control trial was conducted to see if vancomycin powder reduces deep surgical site infections following plate and screw fixation of tibial plateau or pilon fractures.

Patients aged 18-80 treated with hook and screw fixation for a tibial plateau or pilon fracture were prospectively enrolled if they were deemed to be at high risk of infection. Fractures were considered high risk if they were initially treated with external fixation because of swelling that prevented definitive fixation within three days of injury, had a Gustilo-Anderson type I, II, or IIIa open fracture, or had ipsilateral leg compartment syndrome treated with fasciotomy. Enrollment occurred at 36 US trauma centers. Enrolled patients were then randomized to control or intervention groups in a 1:1 ratio and followed for one year. A total of 980 patients were included: 481 in the intervention group, and 499 in the control group. The intervention group received 1000mg of sterile vancomycin powder that was administered directly onto metal implants during definitive surgical treatment. A placebo was not used for the control group.

The authors chose to use surgical site infection within 182 days of surgery as the primary outcome measurement. Within that timeframe, 29/481 patients in the treatment group developed a surgical site infection compared to 46/499 patients in the control group (risk difference -3.4%; 95% CI -6.9% to 0.1%; p=.06). Although this was not considered a significant difference, post-hoc analysis compared rates of infection with gram positive vs gram negative organisms. Here, the authors were able to conclude that treatment with intrawound vancomycin powder at the time of definitive surgical fixation significantly reduced the risk of infection with gram positive organisms (risk difference -3.7%; 95% CI -6.7% to -0.8%; p=.02). There was no significant difference when comparing rates of infection with gram negative organisms. These findings are consistent with the effects of vancomycin. Rates of nonunion and wound dehiscence were not statistically different between the two groups (p>.41).

One limitation is that the study did not follow patients who may have sought follow-up treatment at non-participating hospitals, potentially resulting in underreporting of infections. The study authors believe such underreporting was minimal and likely uniform between the two groups. Follow-up of at least 140 days was achieved by 90.2% in the treatment group and 88.2% in the control group. In conclusion, the authors found that intrawound vancomycin substantially reduces gram-positive infections following high-risk tibial plateau and pilon fracture without a negative effect on healing.