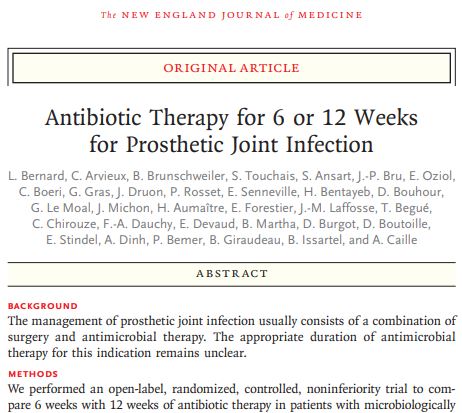 Prosthetic joint infection (PJI) remains a devastating complication following total joint arthroplasty. PJI is often managed with a combination of surgical intervention and oral or intravenous (IV) antimicrobial therapy. Surgical procedures may include extensive debridement, 1-stage, or 2-stage exchange arthroplasty. The choice of antibiotic therapy often depends on results obtained from cultures and susceptibility of the causative organism [1]. Although systemic antibiotics are commonly used for treatment of PJI, the optimal duration of therapy is undefined.

Debridement with retention of implant components was performed in 40.4% of patients in the 6-week group and 42.3% in the 12-week group. Furthermore, 37.9% of the 6-week group and 36.3% of the 12-week group underwent 1-stage exchange while 21.7% and 21.4% underwent 2-stage exchange, respectively. Rifampin (n=267) and fluoroquinolone (n=260) were the most frequent oral antibiotic agents; 194 patients received both. Methicillin or cephalosporin were the initial intravenous antibiotic for 136 of 221 patients with PJI due to methicillin-susceptible staphylococci. Persistent infection with the initial causative pathogen occurred in 18.1% of patients who received 6-weeks of antibiotic therapy compared to 9.4% in the 12-week group; the risk difference of 8.7% had a 95% confidence interval of 1.8-15.6%. However, 6.8% of the 6-week group and 10.6% of the 12-week group developed a new infection following treatment. No significant difference in incidence of serious adverse events, C. difficile infection, or hospital length of stay was observed.

This trial was not without limitations. First, the majority of patients in the 6-week group who failed treatment were treated with debridement and implant retention, indicating a possible confounding variable. Second, the unblinded design of the trial may lend itself to unintended bias. Lastly, antibiotic treatment was not standardized which allowed for variability in the chosen treatment regimens.

The authors concluded that 6-weeks of antibiotic therapy for PJI was not shown to be noninferior to a 12-week duration of treatment. Patients receiving 6-weeks of therapy experienced a higher incidence of unfavorable outcomes. Additionally, in an exploratory subgroup analysis, the difference in risk for persistent infection between the 6-week and 12-week groups among patients who underwent 1 or 2-stage exchange was less than those who underwent debridement alone, indicating a need for further exploration.