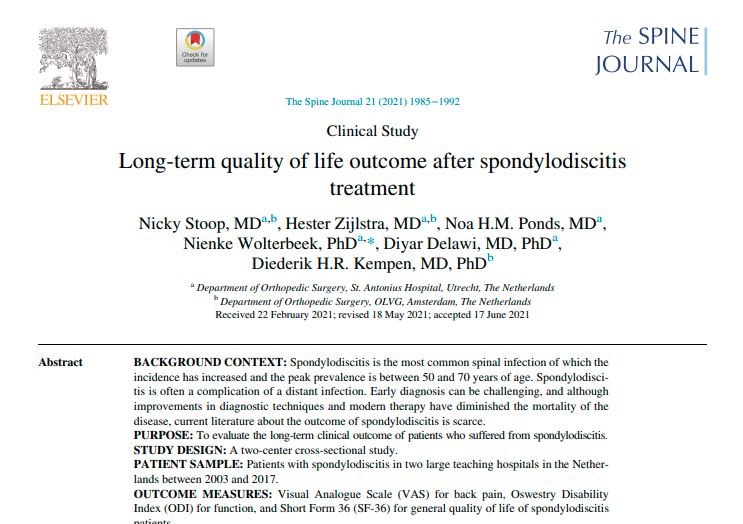 Spondylodiscitis, an infection of the intervertebral disc and adjacent vertebral bodies, is the most common spinal infection with a predilection for elderly patients between 50-70 years of age.1–3 While children have an excellent prognosis, the prognosis in adult patients is less clear.4 Thus, the purpose of this study was to assess long-term pain, disability, and quality of life in patients with a previous diagnosis of spondylodiscitis.

This study was a retrospective cross-sectional study at two institutions in the Netherlands, with presentation of patients spanning from 2003 to 2017. Surveys consisted of the Oswestry Disability Index (ODI), Visual Analogue Scale (VAS) Back, Short Form 36 Health Survey, and four anchoring questions. Of 183 patients identified, only 111 patients were eligible (majority excluded due to death) but 82 patients responded (74%) with a median follow-up of 63 months. A majority of the cohort (51%) had more than one chronic medical condition, representing a comorbid patient population, and only seven patients were treated surgically.

The authors concluded that spondylodiscitis results in long-term disability and pain, and that these patients have worse daily quality of life compared to healthy counterparts. The strengths of this study include the impressive response rate of 74%. However, the large study window introduces significant recall bias into the study, and while the median follow-up time was 63 months, there are no additional analyses based on length of follow-up. In addition, baseline and pre-treatment patient reported outcome scores were not available, thus limiting the study’s ability to interpret the impact of spondylodiscitis on an individual patient basis. Further, there is no mention of whether the normative nationwide sample for comparison had a similar comorbidity profile to the study cohort. Despite these limitations, this study contributes to the literature in showing that patients who develop this disease are at increased risk for significant disability and pain later in life.