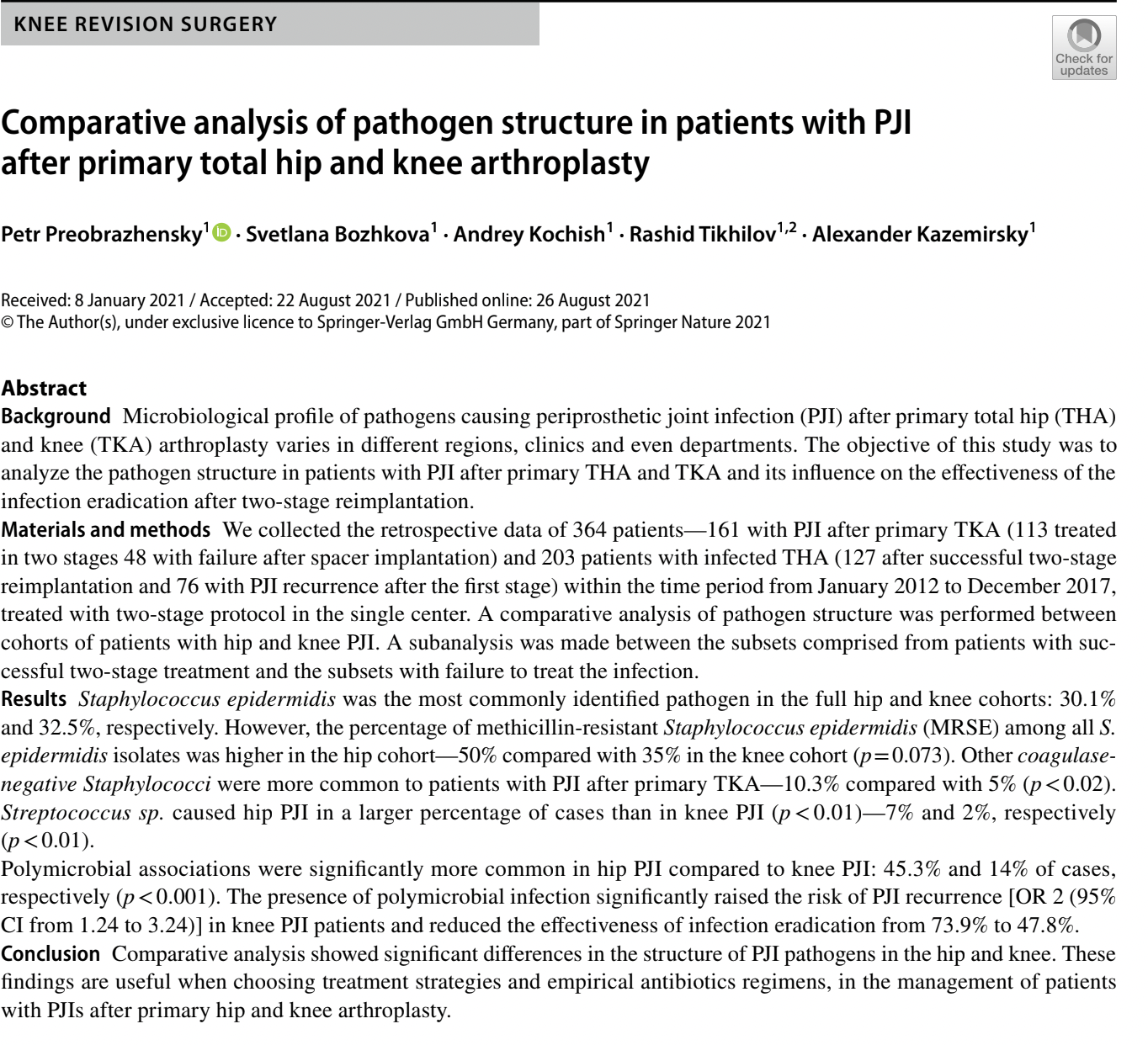 PJI is a high concern as a front runner for causing early re-operation of total hip and total knee
arthroplasties. In particular the rate of TKA revisions due to PJI being 22.3% for primary
revisions and 39.7% for secondary revisions [1] . Alongside this the potential risks and cost PJI
which 25% of THA revisions [2] . These potential risks to patients and the heightened possibility
of recurrence beg for a better understanding of the PJI causing organisms found in these joint
arthroplasties. An analysis of the pathogen structure of PJI in relation the location of the
arthroplasty may allow for treatment plans to be devised.

Preobrazhensky et al. presented an analysis of the infection causing agents in knees and hips
treated with two-stage revisions across a 5-year span at a single institution. They conducted a
retrospective review of 364 patients from January 2012 to December 2017. This cohort included
203 THA PJI cases, of which 127 successfully received two-stage treatment and 76 had a
recurrence of PJI, and 161 TKA PJI cases, of which 113 were treated with two-stage protocol
and 48 failed after spacer reimplantation. The analysis of identified pathogens causing the PJI
revealed that coagulase-negative staphylococci was the most common cause of PJI’s across both
joints with S. epidermidis being that largest strain in both sub cohorts. Interestingly the analysis
demonstrated that methicillin-resistant staphylococcus epidermidis isolate was at 50% for the
hips compared to only 35% of knees. The team also shows that Staphylococcus aureus was the
most frequent culprit in PJI recurrence for knees. The analysis of the recurrence of PJI also
demonstrated that polymicrobial infection raised the risk of recurrence in knees and lowered the
effectiveness of treatment from 73.9% to 47.8%. The authors used strict criteria to build the
cohort, only allowing first time PJI after primary total joint arthroplasty and no DAIR procedures
prior to spacer implantation. While this kept cohort consistent it may also have not allowed for
further analysis on the level of effectiveness the treatment provided each case. The authors

suggest this could be improved with randomized controlled investigations in the future. The
study suggests a that integrating the type of joint receiving arthroplasty should factor into
potential antibiotic treatments to help manage the prominent causes of PJI in each joint.